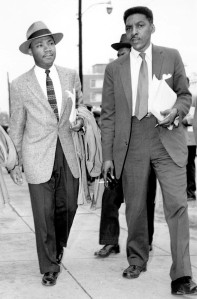 February 9, 2011 at the State House in Providence, the hearing on marriage equality went over six hours and heard testimony pro and con two bills, one of which would legalize same-sex marriage on the same basis as opposite-sex marriage (HR 512). The other (H 5260) would amend our state Constitution to define marriage as between a man and a woman.

There were many references to the civil rights movement, a political cause that we recognize as having been on the right side of history.

This rightness was not so apparent fifty years ago, when our nation was experiencing a wrenching and often painful transformation. The civil rights movement was reviled, described as un-American, a threat to society– dire consequences were predicted. Martin Luther King, at the time of his assassination, was being attacked by some who claimed to have been his strongest allies, because he opposed the war in Vietnam. He died in Memphis, TN, where he spoke in support of a union of sanitation workers, on strike for fair wages and working conditions.

At the marriage hearing there was testimony that gay rights are not civil rights, as if a whole person might not be Black and gay, and suffer discrimination on both counts.

There were claims that civil rights leaders unanimously opposed gay rights. This is belied by the life of Bayard Rustin, a fierce, principled and central figure in the Civil Rights Movement.

Bayard Rustin (March 17, 1912 – August 24, 1987) was an American civil rights activist, important largely behind the scenes in the civil rights movement of the 1960s and earlier. He is credited as the chief organizer of the 1963 March on Washington for Jobs and Freedom.
He counseled Martin Luther King, Jr. on the techniques of nonviolent resistance. He became an advocate on behalf of gay and lesbian causes in the latter part of his career. Homosexuality was criminalized at the time, which made him a target of suspicion and compromised some of his effectiveness.

The civil rights movement faced many accusations, and many difficult decisions about how to define and defend human rights.

One crucial point was the decision to embrace nonviolence.

Bayard Rustin was instrumental in helping Reverend King to form his nonviolent strategy. Rustin was raised by his Quaker grandparents and had been a war resister in WWII, going to prison as a consequence of his principles.

Arguably the high point of Bayard Rustin’s political career was the March on Washington for Jobs and Freedom which took place on August 28, 1963, the place of Dr. Martin Luther King’s stirring “I Have a Dream” speech. Rustin was by all accounts the March’s chief architect. To devise a march of at least one-quarter of a million participants and to coordinate the various sometimes fractious civil rights organizations that played a part in it was a herculean feat of mobilization.