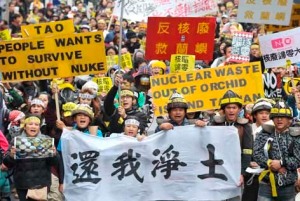 As the US makes plans to build more nuclear power plants, Japan has found none of its existing nuclear facilities safe enough to operate.Public trust is lost… (Photo courtesy of The New Age.)

TOKYO (AP) – Thousands of Japanese marched to celebrate the switching off of the last of their nation’s 50 nuclear reactors Saturday, waving banners shaped as giant fish that have become a potent anti-nuclear symbol.

Japan was without electricity from nuclear power for the first time in four decades when the reactor at Tomari nuclear plant on the northern island of Hokkaido went offline for mandatory routine maintenance.

After last year’s March 11 quake and tsunami set off meltdowns at the Fukushima Dai-ichi plant, no reactor halted for checkups has been restarted amid public worries about the safety of nuclear technology.

This article from Japan Times,End to Crisis is Years, Fortune Away is worth reading for its relevance to nuclear problems the US has kicked down the road–

By MARI YAMAGUCHI and CHARLES HUTZLER
The Associated Press

Once Japan’s leaky nuclear complex stops spewing radiation and its reactors cool down, making the site safe and removing the ruined equipment is going to be a messy ordeal that could take decades and cost hundreds of millions of dollars.

Radiation has covered the area around the Fukushima No. 1 plant and blanketed parts of the complex, making the job of “decommissioning” the plant — rendering it safe so it doesn’t threaten public health and the environment — a bigger task than usual.

Toshiba Corp., which supplied four of Fukushima’s six reactors, including two on which General Electric Co. collaborated, submitted a road map this past week to the plant’s operator for decommissioning the crippled reactors. The study, done with three other companies, projects that it would take about 10 years to remove the fuel rods and the reactors and contain other radioactivity at the site, said Keisuke Omori of Toshiba.

Yamaguchi and Hutzler cite costs of decommissioning US plants like Vermont Yankee and Three Mile Island, which is still a toxic waste site that will require a vast investment of public funds to stabilize long-term.

We just passed the 26th anniversary of the Chernobyl disaster. A veteran photographer, Paul Fusco, who once worked for Look magazine, has created a photo essay from Russia. Link here to see it, but be warned, it’s enough to keep you up at night.

Chernobyl, Three Mile Island and countless nuclear sites less well known continue to menace future generations. We have no right to leave this mess for the sake of corporate profit and the promise of cheap energy never kept.

The answer? Prepare to spend a lot of money safely decommissioning existing nuclear power plants when their useful life is done, stop building more. When the real costs are added up it’s clear that the money is best invested in diverse, local and smart energy.

3 thoughts on “Nuclear Offline in Japan”